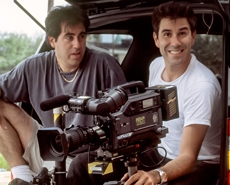 What were you doing 22 years ago?

This month Allied Pixel celebrates our 22nd year in business.

Which got me to thinking about the early days.

Do you remember what you were doing in the summer of 1993? I do. I was shooting a tv commercial for a radio station in Baltimore. Back in those days, we shot on 16mm film with a camera that weighed about as much as a sack of potatoes. We had to ship the exposed film up to DuArt in NYC for processing, praying that we got the exposure right and that FedEx didn’t lose the package. Then the film was transferred onto videotape, which we  would digitize onto a newfangled machine called a nonlinear editor. The final commercial was delivered on a reel of 1″ videotape.

Soon after that, we added multimedia to our repertoire. Those were the early days of interactive, though no one called it that back then. Remarkably, we were able to combine video, audio, text and animation that would all play back together on a laptop computer. We created these programs using Macromedia Director and had to learn a programming language called Lingo to make it do its magic. We delivered the final program on floppy discs and later, on CD-ROM discs. How many evenings did we find ourselves racing down I-95 to the FedEx depot at the airport, to make a deadline?

Then we got into the exciting new world of website design. Flash hadn’t come along yet, but with an animated GIF you could make things blink on and off. Our first designs were for a screen resolution of 800×600 pixels and 8-bit color depth. We used Microsoft Notepad to hand code the HTML and then we would wait with baited breath as our U.S. Robotics modem uploaded the files to the Internet at blazing dialup speed. It made a strange screeching sound as it tried to connect.

Not to sound too much like an old geezer, but how things have changed.

In other ways though, things really haven’t changed at all. We’re still using the latest digital tools to help our clients communicate. I still share an office with Pete and we still have our matching antique oak desks. And incredibly, we still work with some of our very first clients.

I write this with a certain amount of wistfulness, but also with a ton of gratitude. I am so thankful for the amazing people I’ve had a chance to work alongside over the years, and the many clients who I’ve come to call friends.